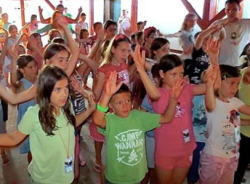 For our church planters, summer is full of activity. The season is always a great opportunity to build new contacts, to reach the hearts of the new generation for Christ and to influence one’s local community.

Boban is a church planter in the Serbian village of Nikinci. This summer Boban managed to unite his community through a Christian summer camp program. Due to financial crisis, many villagers were unable to send their kids away to camp or to travel for a summer vacation. With the help and support of Reach A Village partners, Boban was able to organize a camp right in his own village. A variety of workshops and activities were arranged. These events were open to both adults and children within the community.

One of the most wonderful aspects of Boban’s summer camp was that children with special needs were also able to attend. These children were able to participate in camp activities, spend time with other kids, develop meaningful friendships, and feel a new acceptance within the village.

By hosting a camp right in town, Boban was able to meet the spiritual needs of his community. The camp allowed him to build new relationships with the adults in his village, and the many activities provided a positive and uplifting vacation alternative.

Praise God for church planters like Boban who are open to the Lord’s often spontaneous plans! Because of Boban’s willingness to minister to his village, hearts will be forever changed. 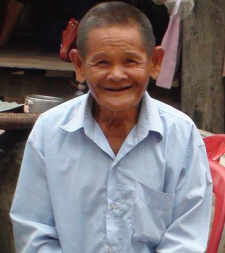 As a Buddhist monk in Cambodia, Mr. Thune collected money from the villagers for offerings to Buddha and for the temple. He worked very hard, but his family was poor and struggled to have enough to meet their needs. They tried to grow vegetables in their garden, but nothing would produce.

Christian pastors reached out to the family and tried to share the Gospel with them, but Mr. Thune drove them away, warning he would cut their throats. But one pastor refused to be deterred. He reminded himself that God loves that old man and continued to try to visit and tell Mr. Thune about Jesus.

Then Mr. Thune’s daughter became very ill. They went to the Buddhist temple to pray many times and also spent a lot of money searching for a cure. Nothing changed. One day, the pastor told Mr. Thune that he should pray to Jesus. After refusing many times, finally the old man agreed. Since he didn’t know how to pray to Jesus, Mr. Thune asked the pastor to teach him.

For three days Mr. Thune prayed to Jesus. Then, he was amazed to learn that his daughter was healed! Mr. Thune knew that the only source of her healing was praying to Jesus. He realized that Jesus is a real, living God who can hear prayers and answer. From that day in 2002, he and his whole family accepted Jesus as their Savior and gave their lives entirely to Him.

Mr. Thune prayed to Jesus asking that they could grow vegetables in their garden and that God would provide for his family’s basic needs. God answered with uncountable blessings. The family not only has what they need, but they sell vegetables and earn money too.

This former Buddhist priest started telling his neighbors about Jesus. Now, he also has a vision to reach other villages, preaching the Word of God.

It has been a longstanding tradition in the Burgas region of Bulgaria for church planters to organize a joint baptism service for the church communities. This year, 50 people took part in the baptism! One of these 50 people was Nedialko.

Nedialko is from the village of Vinarsko. Most people in the village know him, and most did not like him because he was a bad person and very rude. His personality was altogether opposite his wife’s, who is a believer. She constantly prayed for the salvation of her husband.

God began to answer her prayers in a very strange way. Nedialko fell ill. He was very sick, entirely bedridden, and close to death. He was hopeless and distraught as his body failed him. In his despair, Nedialko turned to God. Just as his wife had prayed for so many years, Nedialko accepted Jesus as Savior. He prayed and asked his God for help and for healing.

God not only healed Nedialko physically, He healed him spiritually as well. Today, he is truly a new person. Reach A Village partners note, “Everyone in the village was wondering how this evil man was transformed.” His story of healing and the noticeable change in his temperament are a testament to the power and glory of God. The villagers have taken notice of how God has transformed Nedialko’s life.

Since his baptism, Nedialko’s joy is full and his testimony is even stronger. He hopes that others in his village will also come to know Jesus and be baptized into the body of believers. 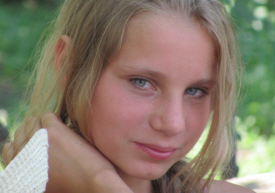 Julie, who is 16 years old, had lived her entire life in a village in Eastern Ukraine that is now part of a war zone. But Julie’s life was tumultuous long before that. Her father abandoned the family when she was a baby, and she doesn’t know or remember him. Her mother was heavily dependent on alcohol. Yelling, screaming and beating were all part of a usual day for Julie, and there was no place to hide from it. Julie’s stepfather also subjected her to all kinds of abuse. Julie’s only solace during that time was her younger brother, Alexander, who is now 14 years old.

Then, Julie discovered the “Future of Ukraine” Christian club. Through church fellowship and fellowship with children’s ministry workers, Julie found not only an oasis in the midst of her tumultuous life, but also a future. For 7 years, she attended every church meeting faithfully and came to know God more and more.

During those years, she experienced the suicide of her stepfather and the rapid deterioration of her mother, who would disappear for days. All household duties fell on Julie’s shoulders – cooking, cleaning, laundry, and everything else. To make matters even more difficult, the family’s electricity has been cut off for the last three years due to their deep indebtedness to the electric company.

Through it all, those in the church witnessed the miracle God worked, forming in Julie a character of humility, obedience, trust in God, compassion, and a willingness to serve others in similar situations. The church stood alongside her with prayer, fellowship, financial support, food, heating materials and clothing. Despite the protests of relatives and villagers, Julie decided to get baptized and joined the church in the summer of 2014.

A few months later, the “Future of Ukraine” club, which had nurtured hundreds of children since 2006, was suspended as the group leader’s family had to move because of the war activities. When the family was offered a place to live, they decided to help Julie also. With her mother’s permission, Julie moved along with them. Thanks to God’s provision and the help of local believers, they always had enough.

In June of 2015, Julie was offered a place to live and go to school in Kiev, which she accepted. She moved into the dormitory and is preparing for the new school year. She is also actively helping during this year’s summer church camps for children. Praise God for the changes He has worked in Julie’s life! Pray she will always remember what the Lord has done for her and remain faithful to him.