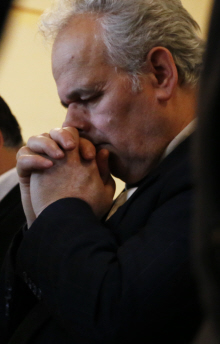 Igor, the grandson of a Baptist minister, had tried to read the Bible several times. He just couldn't seem to understand what he was reading and, time after time, Igor gave up on learning about God.

Life took a turn for the worse while Igor was attending a police academy. The academy expelled him and he was unable to find work. Igor turned to selling drugs and other criminal activity to make money. He began to rely more and more on alcohol to numb the pain in his life and the feeling of failure.

A decade later, Igor was a divorced man, estranged from his children and completely addicted to alcohol. Jobless and out of money, Igor had a mental breakdown. He spent a year in a mental hospital before finding himself in a Christian rehab center. The rehab center gave Igor a chance to finally begin to understand the Bible and come to know Jesus.

When Igor was released, he knew he had to get connected with a Christian community if he wanted his life changes to continue. He was able to move back to his hometown and live with a relative. There he connected with one of our church planters.

Under the guidance of the church planter, Igor spent most of his days praying and studying God's Word. John 3:16 transformed Igor's life and he was finally able to comprehend love, acceptance, and forgiveness. Igor's relationship with Jesus has brought peace to his life. He is at peace with himself and with others.