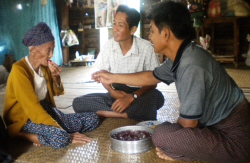 Daw Ye is a typical Burmese grandmother at age 86. She was a strong Buddhist since her childhood and was part of the Asho Chin tribe who also worshipped local spirits. After the death of her sister, who had believed in Jesus, two of her own grandchildren became Christian, but all the rest of their families remained Buddhist.

As Daw Ye got older, she became more and more hard of hearing but remained generous in sharing what little she had with others. She usually showed her love to her grandchildren's church planter by giving eggs and vegetables. The church planter had been praying for her and had a desire to witness to her, but there seemed to be no way because she couldn't hear what the pastor was saying. Therefore, he just prayed for her that the Lord may open her heart and she might accept the Lord Jesus Christ as her Savior.

Then, miraculously, the Lord Jesus appeared to her in a dream.  He was dressed in shining white cloth and He told her that he loves her. She also saw her late sister, Daw Mya, next to Jesus. As a result, she came to believe Jesus and requested baptism and Pastor Daniel baptized her! Finally, many of her family members began to also seek God. Several became new believers. They are enjoying their new life in Christ as a family.

Back to Shine Stories