Grow Your Impact. Every Single Month! 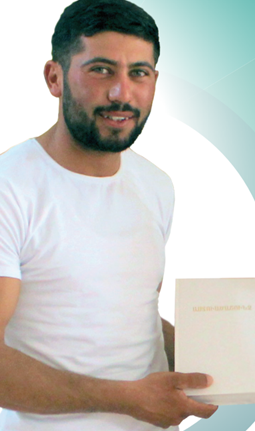 Our monthly Village Impact Partners are an incredibly important group of people who believe in taking the Gospel to the unreached people of the world. Today, we are asking you to join this special group and become a monthly donor. You will help impact people like Hovik (left).

Hovik knows what that means in his life. Because of Reach A Village’s consistent ministry in his village, he found the security he needed.

When he was 21 years old, Hovik left the safety of his home an joined the Armenian army. He knew about Jesus, but he rejected the truth of God’s Word. “My mother and siblings studied the Bible and prayed with other believers in our village,” he says. “I did my best to stop what they were doing because I rejected everything about God.”

When the war between Azerbaijan and Artsakh began in late 2020, Hovik and his unit went to defend their homeland. Soon, they were fighting on the frontlines, vulnerable and afraid in an open field.

“One day, I saw a drone fly up,” Hovik says. “Then, we were bombed. Fire was falling from the sky. Fire was all around me. I could not see anything. My legs trembled. I knelt on the ground and cried out to God.” The other soldiers gathered around him, and they huddled together in fear.

None of them was killed. Later, they learned that they had been under fire for about three hours. “One of the men told me they had seen a circle around me, and that’s why they came to me during the attack,” Hovik says. “God saved us.”

That day, Hovik repented of his sins and accepted Jesus as his Lord and Savior. When he returned home after the war, he apologized to his family and shared the miracle of his salvation with them.

Through regular gifts, Village Impact Partners commit to helping provide the training and Scripture materials necessary for our ministry partners to help people in unreached areas come to faith in Jesus Christ. Examples of impact include: