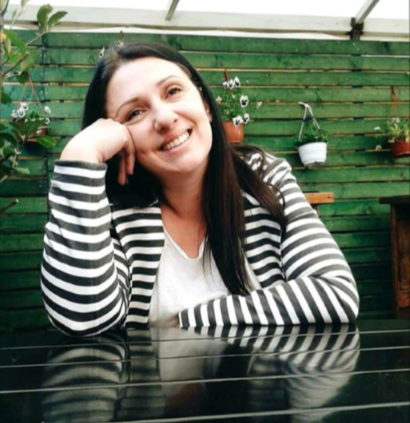 A bold dream changed Tanja’s entire focus. She wanted to leave her home country of North Macedonia and start a new life. She didn’t know how or even why this dream controlled all her actions and decisions. But there was one certainty for her. Making this dream come true for her and her family — her husband, Iko, and her daughters, Lina and Mona — depended solely on her and her efforts.

Tanja and her family spent many years living apart from God. She allowed the dream of leaving her country to control everything in their life together. “I wanted what was best for my family,” she says. “I never asked them what they thought or wanted. They were supposed to accept what I wanted for them as the best solution and path for their lives.”

Difficult battles — with herself and the world around her — filled her days. “I was always unsatisfied, frustrated, and tired,” she recalls. “I felt like everything was against me. I fought hard. Whenever I fell, I would get up and fight again.”

In moments of agony, Tanja would call out to God. She knew He was there, but she didn’t know Him as her Lord and Savior. Then, she would continue pursuing her own goals.

She traveled this path for three years, waiting for her dream to happen. “I took care of my obligations, but I wasn’t really present in my life,” she says. “I had already moved away in my mind.”

Finally, her husband, Iko, took a firm stand. He told Tanja that there were no conditions under which their family would leave North Macedonia. He warned her never to mention her dream again. She was in shock.

“My purpose for life and all my hopes collapsed, just like a tower of cards,” Tanja says. “My dream, the only glimmer of light in my life, was extinguished. I gave up on my life.”

In the midst of her despair, God began to reveal His plans to Tanja and Iko. Through their friends, Igor and Radmila, they learned about a place where a group of people met to study the Bible together.

When Tanja and Iko arrived at the group meeting that first evening, they noticed the love, respect, and kindness of the group right away. “I thought they were pretending,” Tanja says. “I soon realized they are the kind of people I want to be around.”

As Tanja and Iko continued to attend the Bible study, God’s Word began to change them. Tanja experienced a new hunger for life and a renewed desire to continue living in North Macedonia.

“Now, I know I am not alone here,” she says. “Jesus is with me. I have a new life with God. The old life has died, and now everything is new. The fullness of eternal joy flows in me today.”