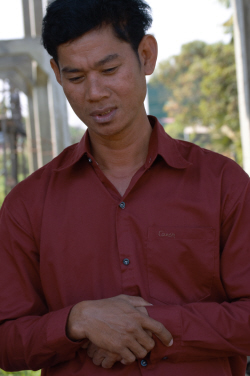 Rangsey is a fisherman in Cambodia who sells crabs from his boat dock. Now, his strong Christian faith radiates out from him to his customers, but he shares how he used to feel weighed down by the requirements of the traditional Cambodian religion handed down from his ancestors.

Rangsey believed that he needed to do enough good deeds to overcome the bad karma from his past reincarnations and earn eternal life in heaven. But he always fell short. He felt there was no hope in this life, only hopelessness and fear of hell.

One day as he was pondering these things, a church planter named Chantrea came to visit him. When she asked what was troubling him, Rangsey replied that he did not believe that our good deeds can save us from hell. Chantrea explained to him that Jesus Christ loves us with a limitless love and died to redeem those who believe in Him and accept Him as Lord.

As she spoke, Rangsey felt his heart flooding with the Lord’s pure love for him as a sinner, and tears coursed down his cheeks. He told Chantrea that he wanted to accept Jesus Christ immediately, follow Him and be His child. Chantrea then led Rangsey in a prayer confessing his sins to God.

Chantrea encouraged Rangsey to come to church on Sunday to worship God and receive a Bible that he could read and study in order to grow stronger in his faith. She said that as he prayed, Rangsey would draw closer to God and that God would speak to him through His Word.

Rangsey recalls, “My heart filled with great joy that I was receiving the redemption of the Lord Jesus Christ and eternal life in heaven with God, and I did not have to pay anything! I just believed in the name of the Lord Jesus, because He shed His awesome blood and paid for me already.”