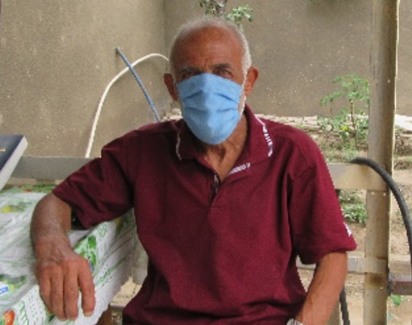 “My whole life was in troubled storms,” says Rubik. “I was constantly angry. I knew how to repair heating systems very well, but I didn’t want to work. I was drinking and living a sinful life.”

Rubik grew up in a village in Armenia. He always believed he was the best person in his neighborhood. But soon after he and his wife got married, he became the worst person he knew. “When she tried to express her opinion about something, I got very angry at her,” he says. “I even beat her. I remember this with great shame now.”

As a father, Rubik was no better. He made all the decisions for their children. As soon as the children were old enough, they got married and left their family home.

Rubik also had problems with his parents. As they grew older and needed his attention and care, he became angry with them. He told them not to bother him with their worries and problems.

He didn’t want to work and support his family. He waited until the food ran out in their home before he found another job. “I lived only for myself, to feel good,” Rubik says. “I didn’t care about anyone else.”

One day in summer 2021, Rubik was working at a house in his village. “I went out into the yard and heard the voices of children,” he says. “I was interested in that gathering and approached the open door. I stood there for a long time, watching and listening to the children and their adult leader. They were talking about honoring and respecting our parents.” He stumbled across a summer camp being conducted by our Armenian ministry partners!

At that moment, Rubik’s whole life came in view to him. When the children and their leader began to pray, he repeated the prayer with them. “After that prayer, a peace descended on me,” he says. “I approached their leader and asked if I could attend and listen to the children's lessons. She invited me to join an adult Bible study group.”

As Rubik met with the adult group, he recognized and accepted Jesus as his Lord and Savior. “I promised that I am not going to be the same anymore,” he says. “I gave up all my bad habits and behaviors.”

Now, Rubik has his own Bible. He reads and shares the Word of God with all who are in his life. “I talk to everyone with love,” he says. “Thank God for those children in that summer camp Bible study program. That’s how I met the Lord.”