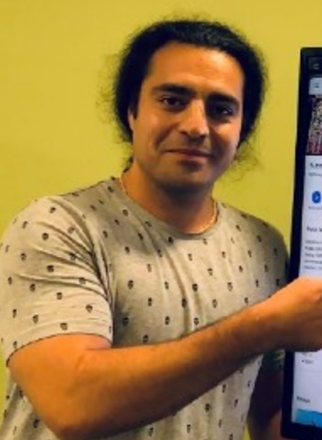 Life as a refugee, even in today’s world, is filled with uncertainty. Displaced persons often find themselves in countries they have never even visited before. Where the languages spoken are unfamiliar. Where many religious practices exist side by side. Where they are shunned and isolated from daily living as they once knew it. Lack of stability in their lives often leads to confusion, depression, and despair.

Jafar is one of those refugees. He is coming against the work of the enemy in his life and in our world with the power of God’s Word. Born in Iran, he began following Jesus as a young man when a friend invited him to join a Bible study group. There, he met other believers. They discipled him and invited him to join them in worship and prayer.

A few years later, Jafar fled his country because of the evil and armed conflicts all around him. Without a plan or a place to go, he was soon living in a refugee camp in another country. While he was there, he met a Christian pastor from Iran who was telling people about Jesus. Jafar did a lot of listening! Soon, he was forced to flee again — this time, to Serbia.

“I realized that the only constant in my life is God and the truth of His Word,” Jafar says. “I connected with a church in Serbia that welcomes refugees. Soon, I accepted Jesus as my Lord and Savior. That was five years ago.”

Today, Jafar continues to grow in his faith. He works in refugee camps as a translator for the Farsi and Kurdish languages. He joins Reach A Village’s other ministry partners to share the Gospel and gather people together for worship, prayer, and Bible study. What a daily challenge they are accepting, willingly and gladly, as followers of Jesus!

One of the unexpected benefits of their ministry is seeing how the Gospel is also reaching people in cities surrounding the refugee camps. These areas are often multi-ethnic and multi-cultural, so God’s Word is uniting many different people in following the one true God.

“God is giving us a vision to share the Gospel among the nations,” Jafar says. “We are doing that right where we are. Please keep us in your prayers as we find more ways to keep our ministry going.”