One day in their village, a group came to Bopha’s house. “I listened to their story about Jesus and His unconditional love for me,” she says. “When they asked me if I was willing to open my heart to receive Him, I said yes!”

Then Bopha asked them to visit Sophal and share Jesus with her. Sophal was lying in bed, seriously ill. “The follower of Jesus went straight to her bed, put his hand on her head and prayed to Jesus for her healing,” Bopha says. “Suddenly, she sat up! Everyone was amazed! She and the rest of our family began following Jesus that day.”

In Sunday School and at camp, Artash especially enjoyed the craft activities. His reading skills are low, but his ability to work with his hands and his creativity are two of his strengths. As he found acceptance, he began to help the teachers with the younger children.

During Sunday School, you would probably see Artash’s excitement for serving the Lord as he calls the children and gathers them together for activities. You would see him operating the computer to play the songs for the children to sing.

One of his teacher says, "I am blessed by Artash’s willing heart. He loves Jesus.” Even with his mental challenges, Artash understands that God's Word is true and that the Bible is God’s Word. At Sunday School and summer camp, he learned to love God even more.

Gancho had been studying God’s Word with his friend, Zarko (left) for about a year before COVID-19. “Zarko showed interest,” Gancho says, “but because of his Muslim background, he felt reserved toward Christianity.” While they were meeting and studying together, Zarko’s daughter became a follower of Jesus and joined other believers in a house church.

One day, Zarko called to tell Gancho that he had coronavirus and was hospitalized. He asked Gancho to pray for him and his family because his children were also infected. “He had trouble speaking,” Gancho recalls. “His voice sounded rough and restricted.”

Just a few hours later, Zarko sent Gancho a text message, asking Gancho to lead him in a prayer of repentance. Gancho immediately called his friend, and they prayed together.

The next morning, Zarko texted to say he had stayed up all night praying and praising the Lord. That afternoon, he was intubated and passed away the next day. Zarko’s children—who are recovering from the virus—are thanking God for His gift of salvation to their father. 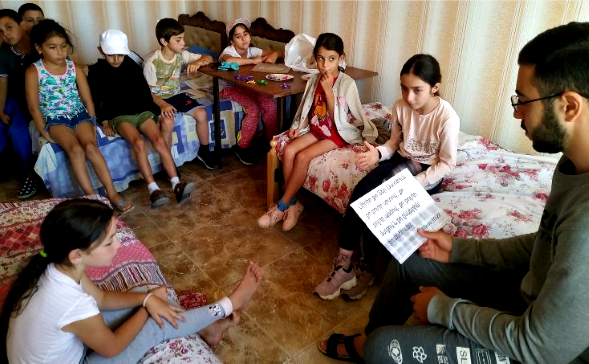 The first day of camp was filled with the usual camp activities: stories, games, singing and snacks. On the second day, something changed. The words read from the Bible touched Arman’s heart. He heard that we are all sinners, that we need God’s forgiveness and that we cannot be saved through our own effort (Ephesians 2:8-9). He became quite unsettled as he started to think about this. One of the camp leaders sensed that Arman was troubled. They talked together for a long time, and Arman asked his questions and heard all of the answers he had been searching for.

He accepted Jesus as his Savior and Lord. He now meets with the leader regularly to talk and study God’s Word together.

Arman will be back at camp again – but this time, as a leader!